On behalf of the Grand Island Livestock Complex Authority, we invite you to host your next event in Grand Island, Nebraska. Since the addition of multiple state-of-the art facilities on the Fonner Park campus, and in association with the Nebraska State Fair, our community has collaborated in providing a top-notch experience for livestock associations, agricultural shows and other shows that have chosen Grand Island to host their event.

We are the home of the ASKARBEN 4-H Stock Show and Nebraska State 4-H Horse Show and would love to provide you the same collaborative leadership, experience and education to provide a successful venue for your organization. One reason nothing compares to our campus is the variety of our venues which are within walking distance of one another. Here are five more reasons our visitors love hosting their shows in Grand Island:

Fonner Park has been in business since the early 1950’s. Over the years it has grown into the impressive complex of facilities as we know it today. It is often the hub of activity when multiple events are held simultaneously or as a part of multi-facility events. The Nebraska State Fair relocated to Grand Island in 2010, bringing with it a breathtaking array of new structures and facilities. The facilities serve the Nebraska State Fair during August and September each year—and are available for all types of livestock shows, trade shows, sales, auctions, dog shows, craft shows, new product and equipment launches, large banquets, competitions, and dozens of other activities the remainder of the year. The choice is yours — large or small, indoor or outdoor, arenas or exhibit spaces, meeting rooms or auditoriums. We have it all.

The campus includes the following facilities. (Click on each for specific details.)

DO NOT DELETE ME

The FIVE POINTS BANK ARENA, initially built for the Nebraska State Fair, has become the shining star for hosting National Livestock events during the other ten months of the year.  This premier arena with state-of-the-art audio and video systems is perfect for top-notch shows.  Grand Island’s central location, easy accessibility and mid-western hospitality continue to draw new and repeat groups to this arena and to the attached barns and exhibition facilities each year. 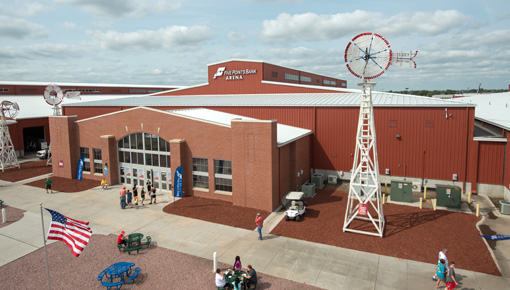 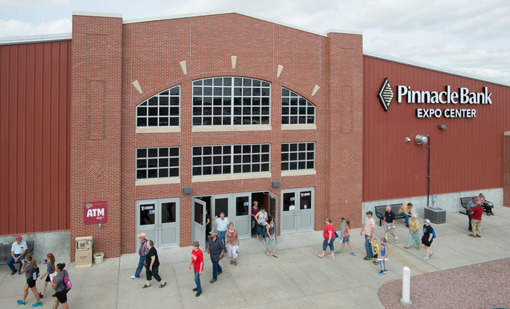 The TOM DINSDALE AUTOMOTIVE CATTLE BARN, attached to the Five Points Bank Arena, offers Rock Bottom Tie Stalls for up to 1,350 head of cattle. An outdoor tie out area is located adjacent to the back side of this facility. The strategically planned wide drive thru loading/unloading aisle provides for easy and quick load in and load out with cattle trailers. The wash racks in this facility coupled with the ease of moving livestock to and from the show arena without having to expose them to the outdoors is every showman’s vision. Grand Island’s central location, easy accessibility and mid-western hospitality continue to draw new and repeat groups to the arena and the attached barns and exhibition facilities each year. 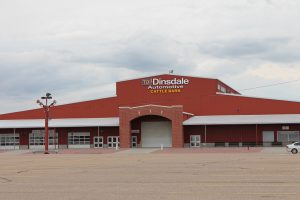 The SHEEP BARN, attached to the Five Points Bank Arena, offers the flexibility of small animal pens, cattle ties and poultry cages.  This facility shares many of the same state-of-the-art amenities as the Cattle Barn including multiple overhead doors, extra wide load/unload aisles, and wash racks. The showman’s ability to conveniently move their animals between the Sheep Barn and the Five Points Bank Arena without outdoor exposure is an added feature of this barn. Grand Island’s central location, easy accessibility and mid-western hospitality continue to draw new and repeat groups to the arena and attached barns and exhibition facilities each year. Excellent facility for stalling and exhibiting livestock of all types.  This Sheep Barn houses Draft Horses, Sheep, Goats, Poultry and Rabbits during the Nebraska State Fair. 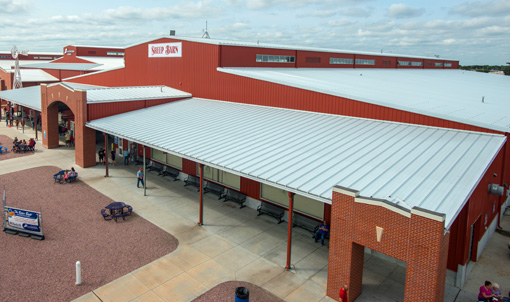 The AURORA COOPERATIVE PAVILION BARN AND ARENA, has quickly become one of the most versatile facilities on the Fonner Park Campus.  During the Nebraska State Fair this facility is utilized for Swine and Alpaca/Llama shows. The other ten months of the year this arena has become multi-functional.  Wedding receptions, fundraisers, cattle sales, large implement training, liquidation sales, teen dances, craft shows and an unlimited list of other events continue to be attracted to this space.  This building has become a real gem sitting next to the larger livestock facilities and nicely complements the Jr. National Livestock shows each summer. Grand Island’s central location, easy accessibility and midwestern hospitality continue to draw new and repeat groups to the arena and attached barns and exhibition facilities each year. 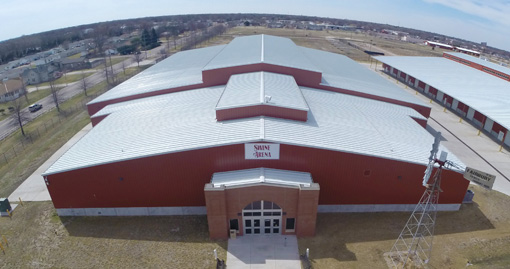 The THOMPSON FOODS INDOOR & US FOODS OUTDOOR ARENA are the finest Equine Center in central Nebraska.  Each year the Fonner Park State 4-H Horse Show is held in Grand Island.  Multiple other repeat horse shows in addition to the Nebraska State Fair equine events keep this facility busy each year. In 2016 the Nebraska State Fair 1868 Foundation kicked off a major fundraising campaign to replace the outdoor equine arena. The new 60,000 square foot US Foods Outdoor Arena is a state-of-the-art equine arena featuring covered grandstand seating for 750 spectators and is fully ADA compliant.  Modern amenities include: Priefert holding pens, bucking and roping chutes, 55′ x 85′ custom livestock shade structure, 12′ x 24′  announcer’s booth with electrical hookups and storage room. Additional amenities include high quality lighting, professional grade sound system and ample parking.  This arena is perfect for rodeo and other equine shows and competitions. Lying adjacent to the Equine Center are horse barns for up to 1200 horses. The Equine Center and horse barns are not available to outside events from January 1 through mid May each year. Grand Island’s central location, easy accessibility and mid-western hospitality continue to draw new and repeat Equine Shows to these arenas. 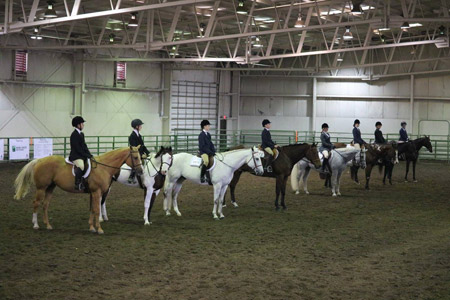 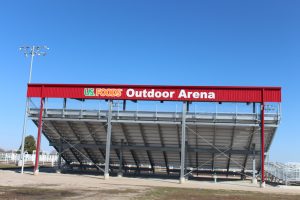 Raising Nebraska is an interactive experience spanning every inch of its 25,000 square feet, focusing on where Nebraska agriculture is today – and how the state is positioned for global leadership in feeding the world.  Raising Nebraska is designed to let people see agriculture from virtually every angle – from water conservation to soil health, from animal well being to food safety, from invention to innovation, from economic impact to global hunger. Raising Nebraska is located on the first level of the Nebraska Building. Please direct Raising Nebraska questions to the following: Sarah Polak P.O. Box 2198 Grand Island, NE 68802-2198 Email: spolak@unl.edu

Since the Fieldhouse opened in 2011, it has become Grand Island’s most popular fall and winter hangout. The Fieldhouse is 70,000 square feet of fun! Inside are batting cages, turf sports fields, basketball courts, volleyball courts, pickleball courts, meeting rooms and a playground for young children. The website www.giparks.com/fieldhouse provides more details and entry forms so you can register online.

Grand Island’s Community Fieldhouse features three party/meeting rooms for entertainment needs. From meetings, reunions, birthday parties, and everything in between, these rooms offer the space and amenities perfect for hosting an event. Kitchen facilities are available upon request. There are 2 small rooms that accommodate 30 people each and one large room that accommodates 60.  Birthday Packages are available.